A Legacy is Cast

The EJ legacy dates back to 1883 when William E. Malpass and his father-in-law Richard W. Round established a foundry on the shores of Lake Charlevoix, in the town of East Jordan, Michigan, USA. This foundry was called Round and Malpass Foundry and originally produced cast parts for the lumber industry, machinery, ships, agricultural equipment, and railroads. In 1886, William’s brother, James, joined the business and the company was renamed East Jordan Iron Works.

In the 1920s, when the lumbering era came to a close, the company welcomed the second generation to the business and expanded into new markets allowing continued success in changing times. Production shifted to street castings, water works valves, fire hydrants, and various industrial castings. Through World War II, the foundry produced castings for the war effort. In the 1950s, semi-automation was introduced into the foundry.

During the 1960s, the third generation automated the foundry with the addition of a high-pressure molding line. By integrating automatic sand processing and mechanized casting handling systems, the company was operating the largest automated molding line in the United States and maximized production capabilities.

Since the late 1980s, the business has been led by the fourth generation descendants of the Malpass family. They have transformed the Midwest business into an international leader of providing access solutions to infrastructure systems.

Beginning in the 1990s, acquisitions throughout the United States allowed the company to expand product lines, sales offices, distribution capabilities, and customer services across North America. In 2001, a new foundry was built in Oklahoma providing additional capacity to service growing markets in the United States, as well as Central and South America. The fifth generation of the Malpass family began joining the company in the late 1990s, continuing the strong family commitment to the company’s success.

In the early 2000s, East Jordan Iron Works began turning its attention to expansion in other parts of the world, with the acquisition of Cavanagh Foundry in Ireland (2000), Norinco in France (2004), McCoy Construction Castings in Canada (2006), and HaveStock in Australia (2010).

In 2012, East Jordan Iron Works and its affiliated companies began doing business using the same name and brand, EJ. One global name and brand, supported by a single mission, vision, and set of values has unified the company. This action leverages all company resources to improve internal operations, as well as provide superior product offerings and services to its valued customers.

Increasing its global footprint, EJ continues to grow through acquisition and reinvestment with the addition of Bernard Cassart & Cie in Belgium (2012), Syracuse Castings Sales Corporation and Syracuse Castings West Corporation in the USA (2012), Etheridge Foundry & Machine Company in the USA (2012), E.A. Quirin Machine in the USA (2013), GMI Composites in the USA (2014), the municipal casting distribution of Mueller Canada Ltd., in Canada (2014), GAV GmbH in Germany (2015), Peter Savage Ltd. and Integrated Ducting Systems in the United Kingdom (2015), Schacht und Bautechnik Vertriebs GmbH (SBV) in Austria (2016), as well as the expansion of composite manufacturing in Birr, Ireland in (2018), the construction of a state-of-the-art manufacturing facility in Northern Michigan, USA (2018) and the construction of a new fabrication facility in New York, USA (2019).

Today, the company provides a full line of access solutions for the infrastructure systems of municipalities, utility companies, airport and port authorities, and private companies. Products include manhole covers and frames, catch basin and curb inlet grates and frames, trench grates, and tree grates. In addition to traditional materials of gray or ductile cast iron, a continuously expanding array of innovative solutions are offered in composites, fabricated steel, and fabricated aluminum. EJ also provides products for water supply systems including fire hydrants and valves, valve and service boxes, and various other water supply products. EJ supplies products to infrastructure projects in 6 of the 7 continents.

EJ continues to be 100% owned by descendants of William E. Malpass, and members of the family continue to be active in managing the business. The fourth and fifth generation remain dedicated to maintaining the company’s long-established culture and values, setting strategies and priorities. This has allowed EJ to remain one of the most stable, progressive, and well-tooled manufacturing companies in the world. The corporate headquarters continues to remain in East Jordan, Michigan, USA.

Business established as a foundry by William E. Malpass and Richard W. Round. Originally called Round and Malpass Foundry, it was renamed East Jordan Iron Works in 1886.

Established in Cleveland in 1893, Madison Foundry specialized in manufacturing municipal casting designs for area cities and the Ohio Department of Transportation. This acquisition allowed EJ to enter the greater Cleveland market and expand sales throughout Ohio.

Charlie Burrier and Dick Cramer formed B&C Utility Supply in 1973 and developed it into the leading distributor of castings in Maryland, Delaware, Washington DC, Northern Virginia and Southern Pennsylvania. As a result of this acquisition, EJ was able to expand into these markets.

Founded in 1965, Vulcan Foundry was one of the first semi-automated construction casting producers in the south. Originally built to serve the Louisiana market, the company rapidly expanded its product line to meet local specifications used across the southern United States. This acquisition allowed EJ to expand into the southern market.

Dewey Brothers, Inc. was a gray iron foundry founded in 1885. It was a major manufacturer of constructions and utility castings for the North and South Carolina markets. When the foundry ceased operation in 1996, EJ acquired its name, patterns and production tooling.

Western Iron Works, Inc. was founded in 1923 in San Angelo, Texas. It became the principal supplier of construction castings in Texas and the southwestern United States. In September 1998, EJ purchased the inventories, catalog, customer lists, orders, trademarks, and patterns, allowing expansion into this market.

Litchfield Welding was a fabricator of junction boxes in Pasadena, Maryland. EJ added this product line to its offerings with this acquisition.

Southern Foundry Company was located in Apex, North Carolina (outside of Raleigh) and operated from 1925 until 1984, when a fire destroyed the plant and equipment. It continued to be the primary supplier of castings in the Raleigh market by purchasing and distributing castings from other foundries. EJ continues to operate a branch office in Apex, supplying the North Carolina market.

Cavanagh Foundry Ltd. operated an iron foundry in Birr, Ireland, for over 200 years. It was a leading manufacturer and supplier of high quality manhole covers, gratings, and frames to the construction, water, civil engineering, telecommunications, cable TV, and energy industries of Ireland. This was the first expansion for EJ outside of the United States. EJ continues to service the Irish market with sales, distribution, and fabrication located in Birr.

Located in Commerce City, Colorado, C & C began operations in 1985. They sold castings and serviced the Denver and Colorado markets. Specialty items were built in their steel fabrication shop. EJ continues to operate a branch office in the Denver area and supply the Colorado market.

Andrews Metal Products in Youngstown, Ohio, had been fabricating steel manhole risers, catch basin risers, and valve box risers since 1988. These products were added to the EJ product line with this acquisition.

Allegheny Foundry Company sold municipal and utility castings in Western Pennsylvania. This acquisition allowed EJ to expand into this market. Castings formerly produced by Allegheny are now made at existing EJ facilities. A branch office in the Pittsburgh area continues to serve customers in that area.

EJ acquired the assets of Inland Foundry Sales, Inc. which sold gray and ductile iron municipal castings in Washington, Oregon, Montana, Idaho, and Alaska. This acquisition improved access to these markets for EJ in the western United States. 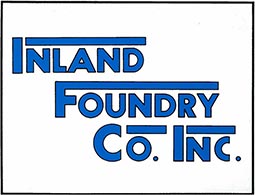 Norinco was a world leader in the design, manufacture, and distribution of ductile iron access covers and frames for all types of underground networks. Norinco had sales and distribution facilities in France, Spain, Italy, England and Germany, and offered important growth opportunities and long-term stability for EJ.

EJ purchased the INFRA-RISER® multipurpose rubber composite adjustment riser product line from GNR Technologies. Production of the EJ INFRA-RISER® was moved from Canada to our United States operations in Ohio. 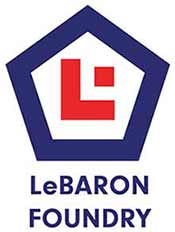 East Jordan Foundry installed a new green sand molding line. The line has helped better utilize the melting and manufacturing capability at the East Jordan facility. It was built to produce larger products with flask sizes up to 76" long by 60" wide. 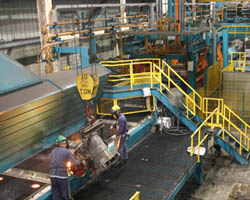 HaveStock was the leading supplier of high quality access covers and grates in their market. With more than 25 years of design, production and sales experience, HaveStock serviced the civil, commercial plumbing, council, electrical, and landscaping industries nationwide. This acquisition broadened the EJ product reach to Australia, New Zealand and Southeast Asia.

In 2012, East Jordan Iron Works, Cavanagh, Norinco, McCoy and Havestock were united under one global brand: EJ. One global name and brand, supported by a single mission, vision and set of values has unified the company. This action leverages all company resources to improve internal operations, as well as provide superior product offerings and services to our valued customers. EJ supplies products to infrastructure projects around the world with 50 sales offices, 10 manufacturing facilities, and multiple research and development centers.

Cassart had been the sole distributor for EJ in the Belgian market. Mr. Bernard Cassart started the business in 1980 and began his relationship with Norinco, now known as EJ, in 1981. With this acquisition, EJ expanded into the Belgian market with the goal of extending sales to neighboring countries in the region 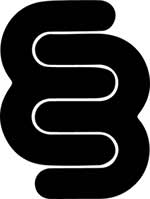 EJ acquired selected assets of Etheridge Foundry & Machine Company in August 2012. With the assistance of Freeman Etheridge, the former owner, existing customers were transitioned from Etheridge Foundry to EJ gaining access to our broad spectrum of infrastructure access solutions.

E.A. Quirin Machine Shop, Inc. had been a long-time supplier of specialty stormwater products to EJ. The company was historically associated with Leed Foundry, which was established in approximately 1886. The facility continues to produce fabricated steel gratings in St. Clair, Pennsylvania.

Founded in 1923, GMI Composites was a family-owned company that produced structural composites since the 1960s. The acquisition added composite access solutions to the EJ product offering, broadening the range of innovative products for specialized applications.

EJ expanded its participation in the Quebec municipal casting market through the purchase of the assets associated with the municipal casting distribution business of Mueller Canada Ltd. EJ had been involved in the Province for nearly 20 years via its INFRA-RISER® adjustment risers.

GAV GmbH is a fabrication and distribution company in Boppard, Germany. Their fabricated access products are considered high value access solutions, specializing in ergonomics, safety and security. The GAV team has been a key EJ distributor in Germany for the past 30 years, and has established and maintains high quality standards with a reputation for innovation and excellence.

The United Kingdom based Peter Savage Ltd and its sister company Integrated Ducting Systems (IDS) specialized in the design, manufacture and distribution of manhole covers, gully gratings, channel drainage and associated drainage products such as surface boxes and geotextiles. IDS specialized in the design and distribution of polyethylene and polypropylene access chambers and pole boxes, as well as integral frames and covers. Together these companies, now known as EJ, have established a market-leading position in the UK with a reputation for innovation and excellent customer service. 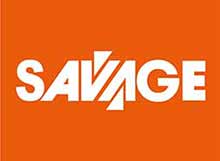 After nearly 135 years in its original location, EJ broke ground on a new state-of-the-art, greenfield foundry in 2017 and began production in the fall of 2018. The new foundry, complete with state of the art production equipment, confirms our commitment to growing the business. With the goal to keep the foundry in Northern Michigan, the property is just 14 miles from the original East Jordan Foundry. EJ is proud to continue manufacturing in Northern Michigan and retain its talented employees. 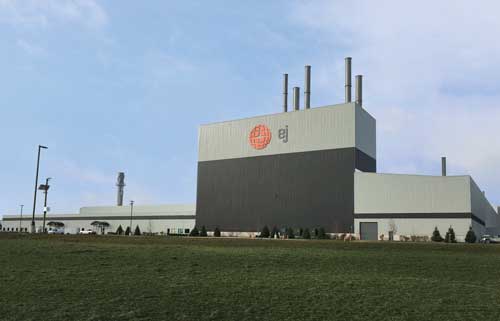 Located in Schroeppel, New York, a new fabrication facility opened for operation in 2019. The new operation, which manufactures, assembles and distributes fabricated products to New York, New Jersey, Connecticut and Pennsylvania, allows EJ to better serve its customer base and, given the short distance from the previous operation, allowed for the retention of its skilled trades workforce. The facility also houses the New York Sales Branch and stocking yard. 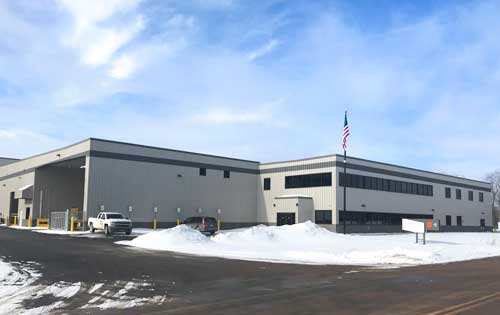