Putting The Green Back Into Tulsa's Concrete Jungle

From Concrete Jungle to Urban Oasis

Completed in September 2012, Guthrie Green is an urban garden and performance space in the 19-block Tulsa Arts District in downtown Tulsa, Oklahoma. Guthrie Green resides on one city block within the District. 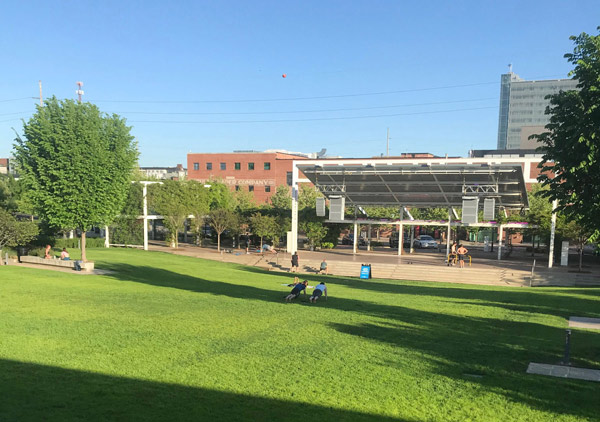 Guthrie Green not only creates new green space in the downtown area, but it also acts as a large geothermal sink to provide energy efficient heating and cooling for nearby buildings. Guthrie Green has a ground-source heat pump system buried under the park.

Transforming the former concrete jungle into an urban oasis required a complete re-imagining by landscape architects SWA Group of Sausalito, CA. The firm was responsible for putting the “green” in Guthrie Green, planting approximately 40 trees throughout the development.

Key elements to the beauty were the addition of Sunray tree grates from EJ. Architects chose model 8667, a five-foot square grate with radiating pattern, for its simplicity and cost effectiveness.

The grates are made in the USA with a minimum of 85% recycled material and meet Buy America, Buy American, and American Iron and Steel (AIS) standards. In its natural state, gray iron develops a pleasant, dark brown patina, and minimizes unnecessary environmental impact. The slotted design allows for efficient watering and is ADA compliant for pedestrian safety. The narrow slot of an ADA grate also prohibits litter from collecting in the tree well and minimizes the growth of weeds. An SWA Group representative said, “We now specify the same model for other projects in Tulsa. We want consistency of appearance to tie the city blocks together, and this grate makes maintenance for the city much easier.”

“We have these [tree grates] at the baseball stadium, along new apartment buildings, and in older areas like the Tulsa Arts District, Greenwood District, and Blue Dome District. It’s the style of choice by the city,” said Chris Hale, EJ Sales Representative. “…we see them everywhere downtown.”