When frost heave leaves the concrete around manhole structures cracked and uneven, SELFLEVEL® can smooth it out.

Michigan, known as a "Winter Wonderland", attracts winter sports enthusiasts who revel in its invigorating temperatures every year, but after the City of Troy experienced a few winters of extreme temperatures and heavy frost, residents weren’t pleased. The resulting frost heave turned many of the manhole structures on the city’s sidewalks and private driveways into trip hazards.

Safety hazards, such as these, are one of the reasons that EJ developed its SELFLEVEL® Concrete Access Assembly. The SELFLEVEL concrete assembly was specifically designed for use in climates where frost heave creates problems such as uplift, settling of manhole structures, and cracking of concrete surfaces.

"We were doubling, and in some cases tripling, our repair costs on a structure."
-Paul Trosper, Superintendent, City of Troy Water and Sewer Department

After the winter of 2014, the concrete around the manholes on the city's sidewalks and private driveways was cracked and had raised up to four inches. The city immediately repaired those manhole structures and started looking for a solution.

The following year the same thing happened. About 25 manhole structures were affected. 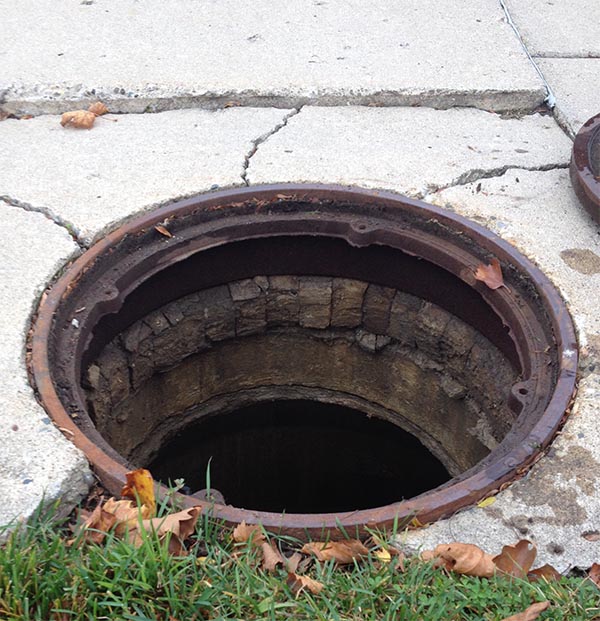 “Unfortunately, a lot of these manholes are located in private driveways—some just a few feet from garage doors," said Mike Schlegelmann, Division Supervisor for the City of Troy Water and Sewer Division. "This is a huge liability for the city."

In addition to the liability issue, continually repairing the sidewalks and driveways around these manhole structures was getting to be costly.

"We were doubling, and in some cases tripling, our repair costs on a structure," said Paul Trosper, Superintendent, City of Troy Water and Sewer Department.

Then there was the question of public perception when crews showed up and "fixed" the problem for a second or third time.

"It just looks bad when you’re there a couple of times for the same problem," Schlegelmann said. 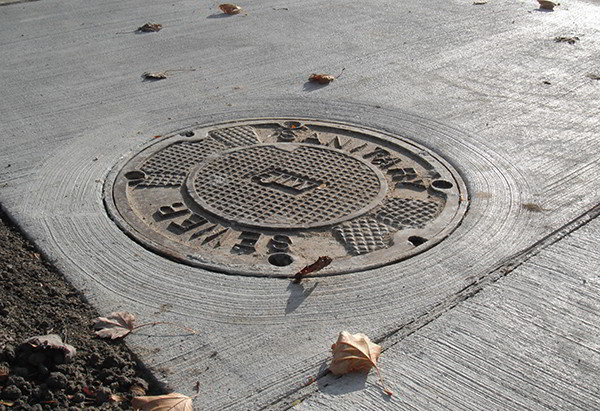 Schlegelmann had begun investigating alternative products to the 1040 frames the city currently used in the summer of 2014. When he ran across the SELFLEVEL Concrete Access Assembly, he started a dialogue with EJ about it.

In October 2014 the City of Troy installed three SELFLEVEL concrete assemblies in private driveways. Unlike many access assemblies, SELFLEVEL concrete assemblies have two frames. The lower guide frame helps to keep the assembly centered over the manhole structure while the upper frame, which isn’t attached to the rest of the assembly, is free to “float” or move with the surface concrete. The crew also installed a few 1040 frames a few blocks away to use as a control.

Then they waited to see what would happen come spring.

"EJ has always been proactive in helping us find a solution to a problem with one of their products"
-Paul Trosper, Superintendent, City of Troy Water and Sewer Department

Over the winter months, EJ collaborated with engineers at the City of Troy to make the following modifications to the 3025 SELFLEVEL concrete assembly.

"We went back to the drawing board and asked our engineers to make changes on the design to make life a little easier for the City of Troy, and to make the product even better," said Randy White, an EJ representative responsible for municipal sales in the Detroit. "It was a great team effort."

The new 3025 SELFLEVEL concrete assembly now accommodates the city’s manhole structures without requiring the city to make modifications to its structures. "EJ has always been proactive in helping us find a solution to a problem with one of their products," Trosper said. "I believe they want to give us the best possible product they can."

The following spring, the manhole structures utilizing SELFLEVEL concrete assembly installations were level. The upper frames had adjusted to the rise in the concrete.

At the control site it was a different story. There was a two-inch drop-off from the concrete down to the manhole structure where the ground had heaved.

"It was a night and day difference," said Randy White.

The City of Troy ordered 50 of the new 3025 SELFLEVEL concrete assemblies, most of which were installed by the end of June 2015. The installation process was very different from that used for the 1040 frames, and the city crew had a learning curve before they became comfortable with the new installation process.

"Our crews have actually become partial to it," Trosper said. "It’s just a simpler process."

The initial test site installations held up to last winter’s brutal temperatures, which plunged to -14 degrees F., and the frost heave, as expected.

"Actually we were pretty confident, even before the installation, that this was going to work out well for us," Schlegelmann said.

In fact, the Water and Sewer Division is working with City of Troy engineers to add the SELFLEVEL Concrete Access Assemblies to the city’s specifications as a requirement for any structures installed in concrete.

Schlegelmann notes that SELFLEVEL concrete assemblies cost more upfront. “But the way I’m looking at it, it costs me at least that much just to send a crew out to take a look at a problem without even doing any work,” he said.

View the installation video or talk to an expert at EJ to find out how the innovative features of the SELFLEVEL access assembly can work for your next manhole project, whether you’re working with asphalt or concrete. Learn about the asphalt installation on the Asphalt SELFLEVEL case study.